The Episcopal Church in the Philippines 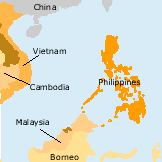 With its history as a Spanish colony, the Philippines was predominantly Roman Catholic. When Americans colonized the country in 1898, Anglican missionary work began in the north and among Muslim populations in the south. Four dioceses were established by 1971. The Church consecrated its first Bishop in 1963 and became an autonomous Province in 1990.