Church of the Province of South East Asia 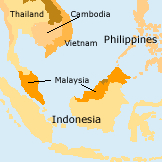 The Anglican Church in South East Asia was originally under the jurisdiction of the Bishop of Calcutta, India. The first chaplaincy was formed in West Malaysia in 1805; the first bishop was consecrated in 1855. The Diocese of Labuan, Sarawak, and Singapore was formed in 1881, dividing in 1909, 1962, and 1970. Until the inauguration of the Church of the Province of South East Asia, the four dioceses (Kutching, Sabah, Singapore, and West Malaysia) were under the jurisdiction of the Archbishop of Canterbury. Although the Province exists under the restrictions of a Muslim government, the Church has experienced spiritual renewal and has sent out its own mission partners to various parts of the world.