The Lusitanian Church (E-P to the Archbishop of Canterbury) 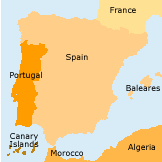 The American Episcopal Church organized the Lusitanian Church, Catholic Apostolic Evangelical in 1880. The Church consisted of Roman Catholic Priests who formed congregations in and around Lisbon using a translation of the 1662 English Prayer Book. A Lusitanian Bishop was consecrated in 1958 and in the early 1960s many Provinces of the Anglican Communion established full Communion with the Church in Portugal. Full integration occurred in 1980 when the Church became an extraprovincial diocese under the metropolitical authority of the Archbishop of Canterbury.