The Primates of the Anglican Communion met at the Helnan Palestine Hotel Alexandria Egypt, between 1st – 5th February.

The meeting was chaired by the Archbishop of Canterbury Dr. Rowan Williams and hosted by the President Bishop of Jerusalem & the Middle East & Bishop in Egypt with North Africa and the Horn of Africa, The Most Revd Dr Mouneer Hanna Anis. The Secretary General of the Anglican Communion, the Revd Canon Kenneth Kearon acted as the meeting’s secretary.

Primates’ Meetings are held in private session.  A communiqué was issued at the close of the meeting. During the course of the meeting three other statements were also released, they can be found in the Document Library. There were daily press briefings and the can be found here. 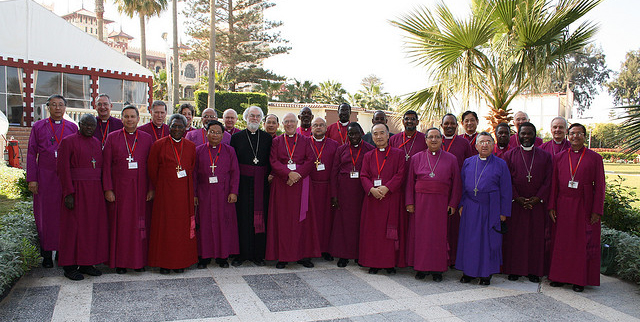 All Provinces were represented at the meeting, except the Church of Pakistan, the Church of South India and the Church of North India where in each case  the Moderator could not attend due to a previously booked engagement. The Primate of the Episcopal Church in the Philippines the Rt Revd Edward Pacyaya Malecdan was unable to attend as he was not granted a visa to travel.

When the primacy is vacant, it is usual for the province to nominate the Dean of the Province or the Senior Bishop to represent that province. This will happen in a number of provinces on this occasion.