The Primates issued a communique at the close of the meeting

The Primates of the world-wide Anglican Communion gathered for their regularly scheduled meeting 14-19 February, 2007,  Jangwani Beach, near Dar Es Salaam, Tanzania. Other Inter Anglican Meetings were held around those dates at the same venue. 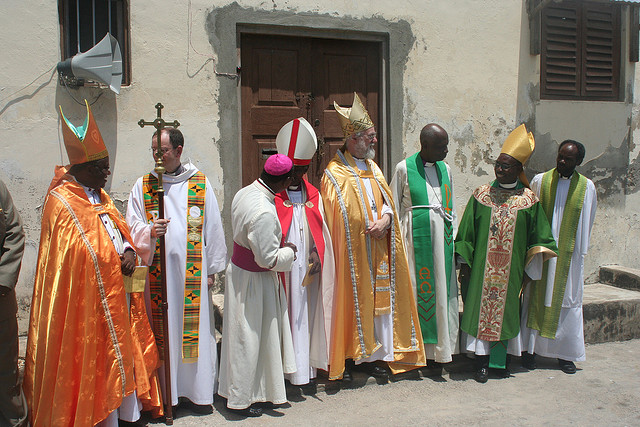 As "primus inter pares" - first among equals, the Archbishop of Canterbury gathers his fellow primates together for Bible study, worship and conversation on the current state of affairs and mission in the global church. Archbishop Rowan Williams has stated that he is looking to the Primates for guidance on matters relating to the Lambeth Conference 2008 as well as looking at the Episcopal Church's response to the Windsor Report, in light of a special report to be discussed from a sub-committee of the Anglican Consultative Council (ACC) and Primates Standing Committee.  There werel also reports on the Panel of Reference and The Listening Process work.  Also on the agenda was the welcoming of Mrs Hellen Wasanga of Uganda as the new Anglican Observer at the United Nations in New York.

New primates were welcomed from including Ireland, USA, Scotland, Brazil, Australia, Korea, Japan, Indian Ocean, Aotearoa, New Zealand, Southeast Asia and Burundi.  This was also the first time an Archbishop of York officially attend a Primates' Meeting. Canon Kearon said, "It is the hope that the presence of Dr Sentamu will allow more discussion of church life in Britain, as the Archbishop of Canterbury's focus is heavily global during these gatherings."

On the Sunday of the meeting the Primates travelled by boat to Zanzibar for a Solemn Eucharist in the Anglican Cathedral, where the altar is built over an old slave trading post, as the people of Zanzibar commemorate the 100th anniversary of the last slave sold in Zanzibar and the 200th anniversary of the end of slavery in the British empire.