Many of us take our nationality for granted. When we are born, we assume the nationality of our parents and all the rights and responsibilities that that entails with minimal effort and little or no worry. Unfortunately, for some people, this does not or cannot happen. Such individuals are referred to as stateless, unclaimed by any nation as a citizen.

The reasons for statelessness are many and varied, so the problem is widespread; the UNHCR estimates that at least 10 million people worldwide are stateless. This can occur due to displacement and becoming a refugee, perhaps in chaotic circumstances where identity papers may be lost and cannot be replaced; discrimination in nationality laws against women or minority groups which prevents parents from passing on their own nationality; failure to account for all residents when a state is formed or becomes independent; or when a child is born to stateless parents.

The impact of statelessness on the individuals concerned can be vast. Without a nationality, in many countries it is impossible to gain permission to work legally, to access the education or healthcare systems, to have a passport or to leave the country, let alone vote or participate in other forms of civil society. Many stateless people say that it is as though they do not exist, forced to live hand to mouth in constant fear of arbitrary detention, scraping together enough money to survive through whatever illegal employment they can obtain, often at high risk of exploitation by their employers. 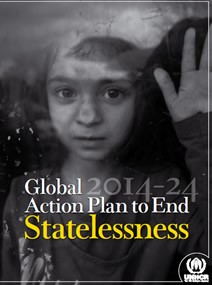 The issue of statelessness can be addressed by reforming nationality legislation, where appropriate, and by encouraging effective birth registration. The Anglican Communion is in partnership with UNHCR to encourage the provision of better nationality legislation and, in particular, to promote and facilitate birth registration in parts of the world where either awareness of the issue is limited or the costs and logistics of registering a child are prohibitive.

In September 2014, Anglicans and their ecumenical partners participated in the UN Global Forum to End Statelessness, which was help in the The Hague. Jointly organized by Tilburg University and the United Nations High Commissioner for Refugees, the conference was attended by 300 participants from 70 countries, representing academia, government, UN, civil society, stateless and formerly stateless persons and the media. A contribution was also made to the Global Forum by the World Council of Churches, who have been advocating for the rights of the stateless.

Archbishop Emeritus Desmond Tutu is among global leaders who have signed up to show their commitment to ending statelessness, participating in the UNHCR’s global statelessness campaign to reduce the number of people in the world who have no country they can call home.

The Anglican Communion is also a member of the #Ibelong campaign. If you would like to commit your church to helping end statelessness, you can join the campaign here.

In recent years, a good example of nationality reform has come from Côte d’Ivoire, where the law has been altered to allow stateless people and long-term residents to apply for citizenship. As a result, the Ivoirian government is working hard to determine the nationality of the 700,000 people in the country who are either stateless or without documentation to prove their nationality, allowing many of the Ivoirian children that were never registered to enrol in school for the first time.

Further reform has come in Sierra Leone, where the nationality law was amended in 2006 to allow women to pass on their nationality to children born in the country, or to children born outside the country if the child would otherwise be stateless. In Kenya, following reform in 2010, a child born to a Kenyan parent is automatically granted citizenship. Both of these cases provide examples of states removing discrimination from their nationality laws, thereby helping to reduce the problem of statelessness.

The Anglican Communion Office at the UN is currently supporting the World Council of Churches' efforts to end gender discrimination in two countries in the Caribbean - the Bahamas and Barbados - where women and men are not able to pass their nationality to their children on an equal basis. You can read more about this work here.

No Child Should Be Stateless, European Network on Statelessness

Advocacy for the Rights of Stateless People, World Council of Churches