The Anglican Communion Office at the United Nations (ACOUN) has been involved with the ongoing struggles of indigenous peoples since the beginning of its ministry in the early 1991.

The United Nations Declaration on the Rights of Indigenous Peoples (UNDRIP) was adopted by the General Assembly in September 2007. Its purpose is to address the past and ongoing violence and abuse of indigenous individuals and peoples. The document is not a legally binding instrument under international law, but it does represent a force in the development of international legal norms, and it reflects the commitment of the UN’s member states.

In 2017, a meeting of the Primates of the Anglican Communion reaffirmed their collective commitment to the UNDRIP, calling on states to work to achieve the declaration’s goals:

“We heard of the plight of Indigenous Peoples, resulting from government policies of forced assimilation associated with colonial expansion. The Truth and Reconciliation Commission that addressed this history in Canada grounded its report and calls to action on the United Nations Declaration of the Rights of Indigenous Peoples. We reaffirmed our commitment to encourage all governments to support the UN Declaration” - Communiqué from the Primates’ Meeting, October 2017

Through participation and advocacy at the annual UN Permanent Forum on Indigenous Issues (UNPFII), ACOUN is committed to supporting and sharing resources with indigenous communities, and also helping to highlight and address urgent issues affecting these communities, such as climate change and intergenerational trauma.

You can learn more about how ACOUN engages at UNPFII by reading our report on the most recent meeting of the Forum.

In all of our work, ACOUN’s role is to raise up and represent Anglican voices and experiences. It’s therefore really important for us to work with the Anglican Indigenous Network and directly with provinces and dioceses of the Anglican Communion, to support local initiatives to protect and advance the rights of indigenous people. 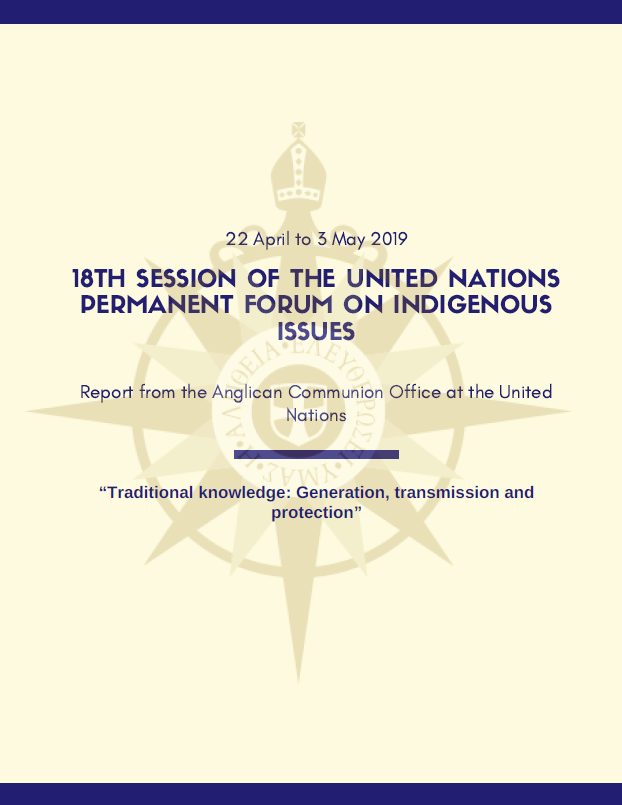 Report from the UN Permanent Forum on Indigenous Issues, 22 April – 3 May 2019

The 18th Session of the UNPFII highlighted a number of themes relevant to the concerns of the Anglican Communion. This report is organized around some of the key policy discussions that took place at the Forum and ends with some actions that the Anglican Communion Office at the United Nations (ACOUN) is committed to taking between now and the next meeting of the Permanent Forum in 2020.