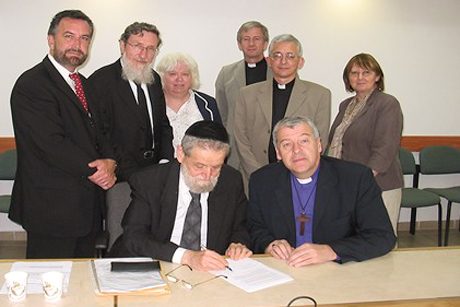 Anglican Jewish Commission of the Chief Rabbinate of Israel and the Office of the Archbishop of Canterbury
Photo Credit: Catholic Ireland

The Archbishop of Canterbury, Dr Rowan Williams and the Chief Rabbis of Israel, Chief Rabbi Shlomo Amar and Chief Rabbi Yonah Metzger  signed a joint Declaration on 6th September 2006 which sets out a framework for continuing dialogue between them.

In the concluding paragraph of the declaration they express a desire to continue in "a dialogue of mutual respect in which we seek only to understand each other better and to strengthen our own communities and their affection and respect for each other. To this end we commit ourselves to further meetings in Jerusalem and at Lambeth and to invite others in our wider communities to join with us. We charge our colleagues together to put in hand the necessary arrangements which will make for further fruitful meetings."

From this has developed a two-fold pattern; first the meetings of the Principals (the two Chief Rabbis of Israel accompanied by The Chief Rabbi of Haifa, Shear Yashuv Cohen, and the Archbishop of Canterbury accompanied by Bishop Michael Jackson of Clogher, Ireland) who receive and discuss the work of the Anglican Jewish Commission and provide subject matter for future Commission meetings and second, the Commssion itself, chaired by Bishop Michael, which looks in greater depth at matters of current mutual interest and concern from the perspective of Jewish and Christian writings, scripture and theology.