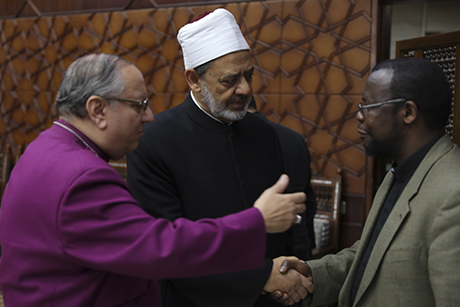 Most of the world’s population identifies with a religious group. With a presence in more than 165 countries around the world, Anglicans and Episcopalians find themselves living alongside people of a variety of other faiths.  Building mutual understanding is crucial.

To that end, it is vital that Anglicans are in honest dialogue with other religions. The Anglican Communion is engaged in dialogue with senior figures in the Muslim and Jewish communities. The work of dialogue in building trust and understanding is particularly important given the rise in violence by religious extremists on faith groups around the world.

This work has been underway for many years but is now mainly co-ordinated under the umbrella of the Anglican Inter Faith Commission.  The Commission was set up at the Primates’ Meeting in Canterbury in 2017 at the request of the Anglican Consultative Council (ACC16) which had met in Zambia the previous year.

The Commission is chaired by Bishop Mouneer Anis, the Bishop of Diocese of Egypt with North Africa and the Horn of Africa. Its work is co-ordinated by Katie Hodkinson, who is based at Lambeth Palace.

“If we want to understand our friends and neighbours of different faith backgrounds, we need to listen to them and to learn from them, to be prepared to be challenged by them and to seek to work together for the common good.”